One Tok over the Line 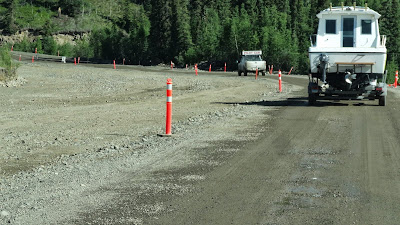 Today we drove from Beaver Creek to Tok (sounds like poke) on more of the frost-heave road.  But the Canadians are busily trying to fix it.  We saw a lot of this.  Two hours to drive 50 miles but once we crossed the border the road improved.  Still not perfect, but better. 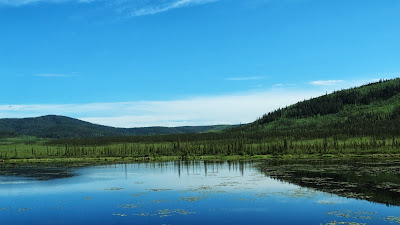 Fewer enormous mountains, but lots of impressive green hills and dozens of little lakes and ponds, which seem to harbor the mosquitoes that plaque Al, who calls them divebombers.  How can one little guy make so much noise in the middle of the night?
One of the books says that there are about 30 varieties hatching and preparing for torture.
A moose may lose a pint of blood a day to mosquitoes.  A pint!
I thought only beer came in pints. 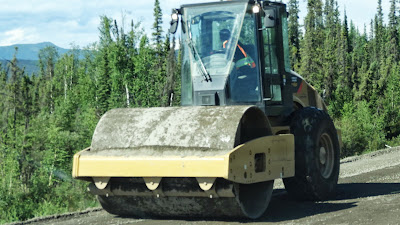 I looked for the Road Runner but he must have already popped up and dashed away.
Those skinny trees seem to be bottle brush black spruce.  They grow so slowly that a tree two inches in diameter may be 100 years old.  They spread their roots in the boggy, shallow soil above permanently frozen ground, which blocks water drainage and limits root growth. 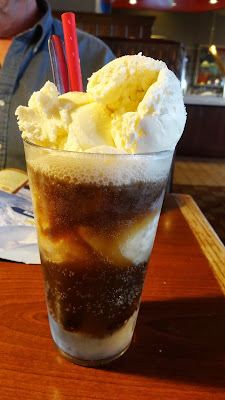 Al needed this to recover from the trauma of driving through the wildfire area.  We were told that three are burning along the route we took and there were flashing road signs to warn us, but we saw nothing.  In a record year, more than 650 major wildfires burn across the state, half of them ignited by lightning.  Although only two out of every ten lightning bolts hit the ground,  Interior Alaska can be struck 6,000 times daily!   Fire can smolder beneath a mossy carpet several feet thick during wet weather and even throughout the winter.  Wow!
(Again my source of information is the Milepost Travel Planner, which is filled with goodies.)

Last night we attended a local performance in Beaver Creek and one guy said that he is the night watchman but since it's never really night, he plays the piano instead.  Tonight we saw a group of local singers and the guy said that it's good to be a teenager in summer Alaska when your parents tell you to be home before dark.