Here we are in Stavanger, Norway, in one of the fjords, which are gorgeous!  Lots of green and hills/mountains, beautiful country.  The people are very friendly and seem to all speak English, which is very helpful to those of us who are only educated in one language.  Europeans all seem to have 3 or more going on at the same time.  Makes me feel like of stupid, but I'm sort of used to that.
Yesterday was Oslo, which is filled with history, but everything here is.  We just walked by a church that was built in 1125, but they wanted a bunch of krona to look inside, so you know what we did.  Now we're in a wi-fi cafe (they want a million dollars an hour on the ship to use the incredibly slow wi-fi which keeps losing the connection) and are going to see an oil museum.  Can you feel the excitement?
I'll be back when I can get online again.

This morning we flew from Berlin to Copenhagen, which is a bustling city.  I don't know much about it yet - all we did was walk down the main shopping street (every chain store you've ever heard of) and have lunch by all the very old but very colorful houses in the Nyhavn district, by the boats.  It rained a bit, but we were under umbrellas and they provide blankets.  Romantic.  We spent a bit of time at the Tivoli Gardens, which are beautiful - immaculately manicured and blooming.  There is an amusement park included and dozens of restaurants and ice cream opportunities.

Tomorrow morning we will board a Royal Caribbean ship for a 7-day cruise of the Norwegian fjords, so will probably be out of wi-fi range.  You'll have to sit right on the edge of your seat to hear all about it when we return to the land of the connected.
Posted by Pat Petri at 1:16 PM 1 comment:

Did you know that the first mention of Berlin on paper was 775 years ago?  They are celebrating the birthday, but this city seems to be one that takes pretty much everything as it comes, including wars and walls.  It's quite impressive to see the pieces of the wall that are still standing, but unimaginagle to think what it must have been like to be divided from friends and family for 28 years.  We have seen so very much history that I can't even begin to tell you about it, but it is a city of contrasts.  Buildings that have been around for a few hundred years and were fortunate to survive bombings right next to brand new buildings that are part of the reunification reconstruction.  We saw the church where J S Bach was the organist.  Cool.

Yesterday Al fearlessly rented a car and we ventured to Dresden to see Fred.  Remember him?  The legendary host at Alfred's for so many years on Broadway?  It was a marvelous day, nice to see him in his own German world, and to get a glimpse of Dresden, which also has endless history.  Now we're going to the German Historical Museum.  I hope there is an ice cream shop nearby.
Posted by Pat Petri at 12:48 AM No comments:

Wednesday morning at oh-my-god-thirty we climbed on a big tour bus which took us to the Cliffs of Moher, on the Western coast of Ireland.  It's gorgeous (google for pictures), even in the rain and wind.  With the wind whipping my black hooded raincoat I felt just like the French Lieutenant's Woman, except for being older and fatter and on a different island.  Except for that. And my man was right by my side.  But still. . . . .

Our bus driver was full of stories of Irish lore, history, and songs.  He might have talked for 10 of the 13 hours that we spent with him, but we learned so much.  It was a beautiful drive across the Emerald Island and included Galway Bay, which Al really was longing to see because his dad used to sing a song about it, even though he can't remember any of the words or the tune.  We even saw an Irish rainbow, but no leprechauns or pots of gold.

Thursday we flew to the Isle of Man.  I'm positive that the ride to the airport was longer than the flight.  You can see the entire island from the air.  It has been a vacation destination forever, including for the Celts and the Vikings.  Well, maybe vacation isn't the correct word for what they did here, but you get my drift.  Turns out that the Vikings weren't all bad guys.  They established cities where there were none, here, in Ireland and elsewhere.  The Tynwald  is the oldest Parliament in the world and has been is existence for over 1000 years.  Apparently when they realized that there was nothing left to loot or plunder they became successful traders, settled down and married local woman, leaving blonde blue-eyed kids everywhere.

Tomorrow we move on to Berlin.  Auf Wiedersehen.
Posted by Pat Petri at 12:40 PM No comments:

She Wheels Her Wheelbarrow

Dublin is wonderful!  There is so much history, not just about St. Patrick and the snakes.  And the literary culture is endless, not just James Joyce.  My favorite, Oscar Wilde, was born here, and George Bernard Shaw gave us Eliza Doolittle.  The list of influential writers born in Dublin is too long to type, but it's quite impressive.  Saturday night we saw a production of Sean O'Casey's play "The Plough and The Stars."  Today we bought the book because some of the authentic Irish dialogue flew right past us.

I'm sorry I can't post a photo of the fictional Molly Malone statue, which they say is the most photographed statue in Dublin.  She is portrayed as a rather buxom fishmonger so it's natural that the women of town would spread the rumor that she was a bit of a good time girl.  She is referred to as The Dolly with the Trolley, the Trollop with the Scallop, the Dish with the Fish, the Tart with the Cart, the Flirt with the Skirt, and that she was known to sell a bit.

Today we visited the Guinness brewery and learned all about how they roast the barley to make the special dark porter.  It was informative and ended happily with a view of Dublin from the top of the building and a pint for each of us.  Why can't I find a chocolate factory?

The Queen Mary 2 is such a civilized way to cross the Atlantic.  Eating, drinking, napping, reading, lolling without ever feeling guilty about not going ashore for exploration because there is no shore!  The very best part - no jet lag because we lost one hour every day at noon when the Captain (who sounded exactly like John Cleese doing a Monty Python shipboard sketch) popped on the PA system to tell all 2600 passengers and 1200 crew about the ocean floor and the time change.  A typical 7-day voyage serves 50 tons of fresh fruit and vegetables, 12 tons of meat, 8 tons of poultry, and 13 tons of seafood.  No wonder we ate so much!  They didn't tell us how much booze is consumed, but that would be an interesting statistic.
We arrived in Southampton on Friday morning, when Julie and Robert went to London for the weekend and will return to Lake Charles tomorrow.   Al and I had a little tour of Southampton then flew to Dublin and checked into the World's Smallest Hotel Room.  It's clean and centrally located, but you have to step outside to change your mind. It makes Homer look like a gigantic palace.   Last night we dined at The Church, which is exactly what it sounds like.  A church built in 1700 is now a restaurant.  Arthur Guinness was married there.  Jonathan Swift attended services there.  Handel's Messiah was first performed in Dublin in 1742 and he regularly practiced on the huge pipe organ, which is still there.  Wow!
There are no photos because I can't seem to get them from the camera to the Galaxy Tablet.  I need so much help, but the priority is having fun, so you'll just have to imagine it.  You can do online searches of all the places we go and pretend that I took those fancy shots.  Have a great weekend celebrating my birthday.  Will you still love me when I'm 64?
Posted by Pat Petri at 2:54 AM No comments: 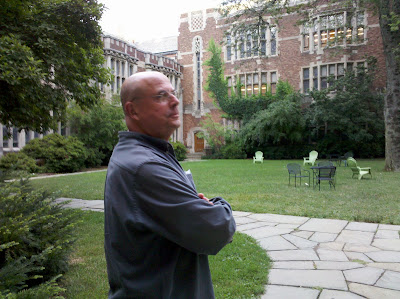 Yesterday we were running lots of errands in preparation for the Big Trip, but managed to find time to stop by Yale, which was was granted a charter in 1701 and the buildings are very impressive.
Makes a fella feel kind of smart just to be gazing at them.

Tomorrow we will be putting Homer and the truck in storage in New Haven, going to New York to meet Julie (Al's sister) and Robert, and on Friday sailing on the Queen Mary 2 for England.  Julie and Robert will return to Lake Charles, but Al and I will go to Dublin and begin gallivanting around Europe.  I know there won't be internet connection while in the middle of the Atlantic (unless we want to pay a million dollars a minute), and don't know just what wi-fi will be as we traipse around Europe.  I'll try to post when I can, but don't expect much of me, okay? We'll be returning to NYC on October 1, full of colorful stories.