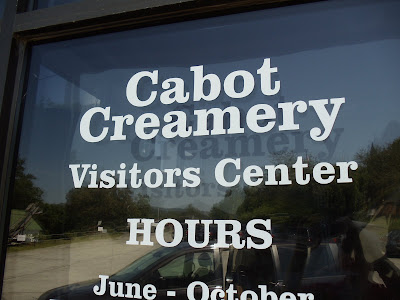 It was a busy tourist day, starting at the Bragg Farm Sugarhouse, where we learned all about collecting the sap, boiling and bottling maple syrup.  It takes 40 gallons of sap to produce just one gallon of syrup.  A mature tree yields about 10 gallons of sap, so now we know why it's so precious/expensive.  It has to say pure to be the real thing, not just artificially flavored to trick us.
Next was the Cabot Creamery, where they showed us cheese making.  In the East they have white cheddar, but in the South and West, people want yellow cheddar so they add color.  Aren't we just finicky?  And easily tricked, because it is the very same cheese! 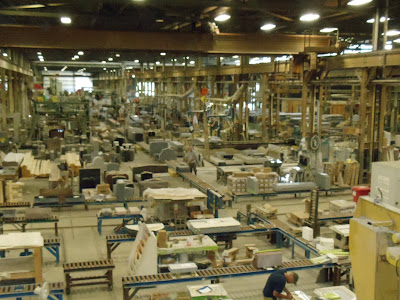 Ever hear of Rock of Ages?  Not the hymn or the recent movie, but the granite quarry/manufacturer.  The list of famous monuments and memorials they have created is too long to type.  The video is kind of a long ad for a cemetery stone, and the workroom is open for your viewing pleasure. 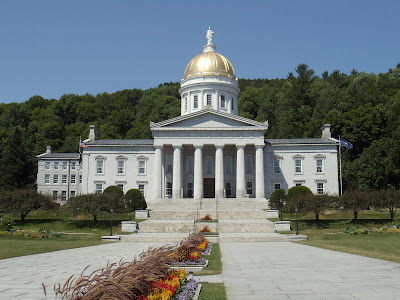 On to Montpelier, the Capital of Vermont, which was named by Samuel de Champlain, the French explorer, when he called it les verts mont (green mountains).  The entire state only has 625, 741 people (49th) in 9,614 square miles (45th),and the smallest capital city in the U.S. (7,702) with the smallest capitol building, which they call the State House.  It's also one of only six with a gold dome.  Do you feel smarter now? 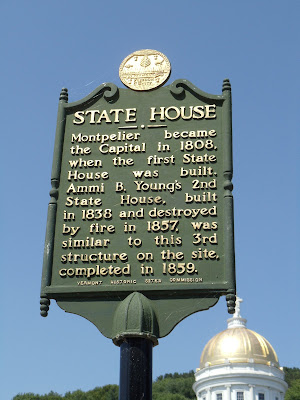 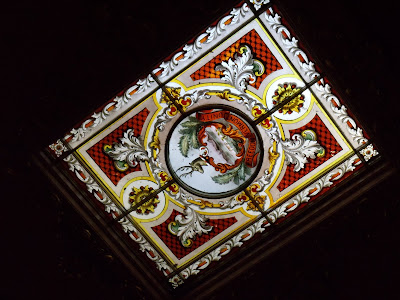 Stained glass in the ceiling. 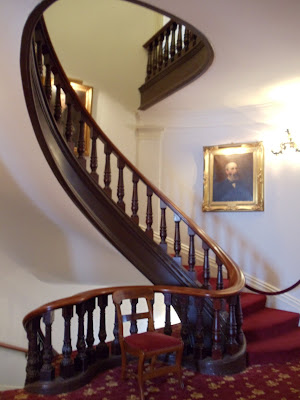 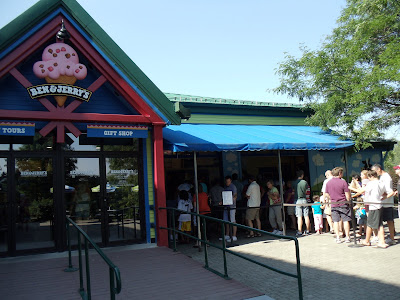 No visit to Vermont is complete without the Ben and Jerry's birthplace in Waterbury.  But don't go on a Friday afternoon in July.  Too many people and they weren't even making ice cream, so the tour ($4) consists of a video that shows you the process.  It is now owned by Unilever, a British-Dutch conglomerate.   Bertolli, Hellmanns, Knorr, Lipton, Good Humor, Popsicle, Skippy, Wish-Bone, Vaseline, Brylcreem, you get the drift?  So much for the home town tie-dye boys.  We forced ourselves to have a cup of ice cream and high-tail it out of there before the kids went crazy. 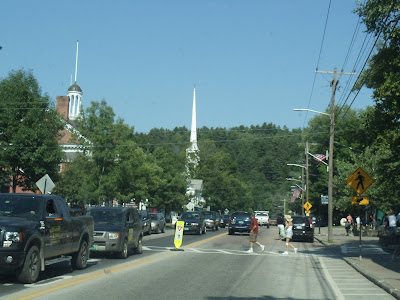 Stowe is a major tourist town, with ski vacations, fall foliage viewing, hiking, gold, etc.  The white-steepled church is picturesque, but not when the truck is whizzing past too quickly.  Oops.  All of these charming towns are like going back in time a few years - no chain stores.  Neither hide nor hair of a Starbucks.  And none of them are big enough to justify a Target, Walgreens, etc.  It's nice to see so many independent businesses on thriving main streets.
Did I mention Lake Champlain Chocolates?  No?  Well, I ate them already.
Sorry I didn't save any for you.