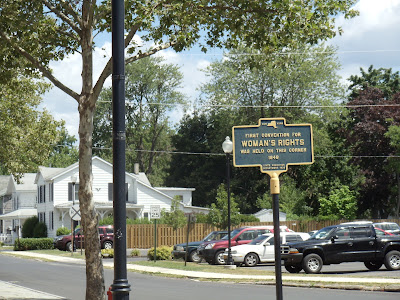 We left Buffalo bright and early, heading toward Florida, New York, sort of near Albany, for the next stop on our adventure.  After a brief tasting at one of the New York wineries, we found ourselves in Seneca Falls just in time for lunch.  It's a beautiful town and has tons of history, but we didn't have time to explore.
This is where Amelia Bloomer edited the first newspaper for women, The Lily, which was issued from 1849 until 1853.  She was also interested in dress reform, advocating that women wear knee-length dress with pants worn by Elizabeth Smith Miller of Geneva, New York.  Amelia introduced Susan B. Anthony to Elizabeth Cady Stanton.  The Seneca Falls Convention was held in July of 1848, pushing the Women's Movement forward.  Coutless women kept fighting so that we can wear pants to the voting booth. 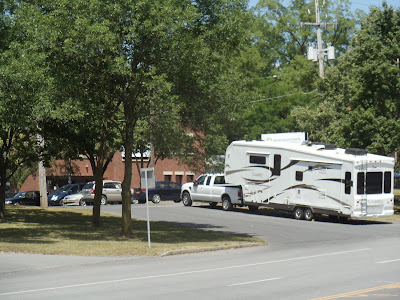 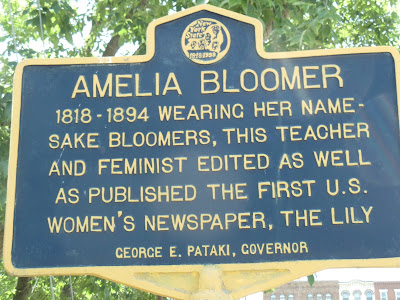 Just after lunch the GPS woman who lives in the dashboard told us to take a sharp right turn, but the AAA map showed us to go straight across the state.  Well.  Turns out that there are two Floridas in New York, one the Town of and one the Village of.  Google only knows of the Town and would have lead us drastically astray.  After a lot of consternation, we got on the right path and are now much farther south than we planned, but it's all part of the adventure.  In case you're wondering why we didn't just change the plan, you need to know that we had mail forwarded to the Black Bear RV Park so had to fetch it.  So here we are.
Always check and double check the directions (entering the zip code turns out to be very important)
is the lesson of the day.