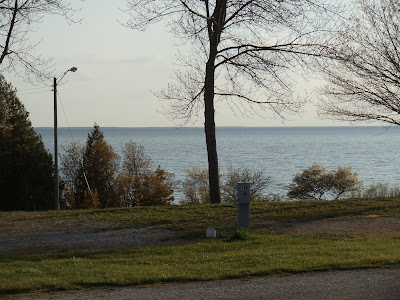 Here we are on the U.P.  (Upper Peninsula) of Michigan, in the delightful Lakeshore RV Park, right smack on the shore of Lake Michigan.  Here is the view from Homer's perspective. 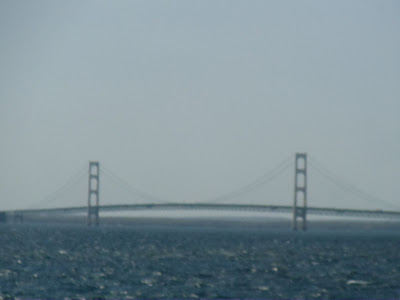 The Mackinac Bridge looks kind of familiar, doesn't it?  But it's painted beige and green.  It's the third longest bridge in the world, the longest suspension bridge in the Western Hemisphere, with a total suspension of 8,614 feet, and a total length of 26,372 feet, just shy of 5 miles.  The deck could move as much as 35 feet east or west in severe wind conditions.  They say the weight of the cars would bring it back to its position.
I kind of don't want to be one of those cars. 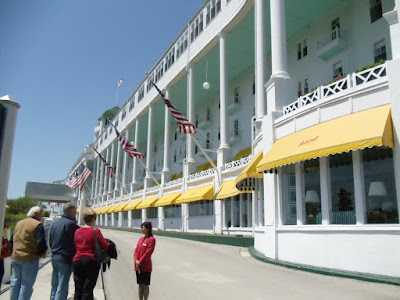 Yesterday we took the ferry to Mackinac Island, where they don't allow motorized vehicles.  Everything is done by horse (500 of them, many the gigantic Clydesdales - did you know they are from Clydesdale, Scotland?) and carriage or cart, or bicycle.  It's beautiful and peaceful, but the season doesn't begin until June   Only 600 people live there year-round, but in the summer that number increases drastically with tourists and workers who tend them.  There are more fudge shops than a girl could visit in one day,
but that doesn't stop one from trying. 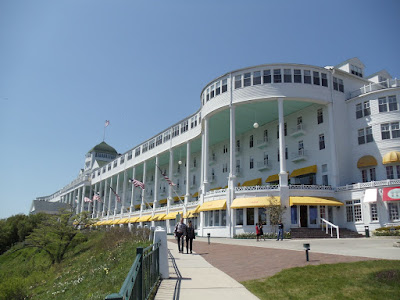 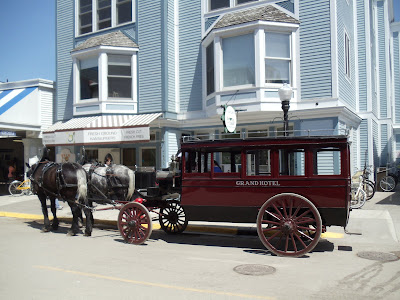 Do you notice a pattern of enormous amounts of food served?
I need Jenny Craig to come slap me upside the head.

Some here spell it Mackinac, with the French silent c.  (What's the point of that?  No wonder French is so hard to learn.)  Others use the English spelling of Mackinaw.
But it's always pronouced  Mack-in-aw.  Now you know, doncha.