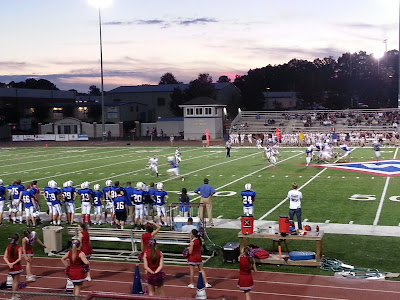 We're in Marietta (Atlanta) to spend three weeks with Chrissy, Nicholas and Matthew.  The really nice part is that we can see them every day but still sleep in our own bed.  There wasn't a lot of sleeping for Nick on Thursday night because of the excitement of the high school Freshman football game.  In the very last minute he kicked the winning field goal - 47 yards!   The weather was perfect, the sun was setting, the cheerleaders were adorable, and Nick was the hero!
(The picture isn't of The Kick - I couldn't have held a camera during all that frenzy.)

Did I tell you that on Tuesday we went to visit the childhood home of our eleventh President,
James K. Polk?  Well, a house in Pineville, NC  that belonged to somebody else from the same period but moved to the site of his home.  Well, across the street from his original home but on property that his father owned.  Nothing is as it seems.  He did much for America, including acquire California, New Mexico and the Oregon Territory.  There is a lot more, but you'll have to look it up.  He wasn't a healthy guy and worked so hard that he died only three months out of office at the age of only 53!

We had a fine day in Charlotte, which is the second largest financial center (New York, in case you were going to ask) in America.  The parts we saw and clean and active and pretty.  We spent a few wonderful hours at the Mint Museum Uptown, which houses American paintings, the current exhibit shows works by Robert Weir and two of his 16 children.  (What's with these people?)  It's impressive, but I was more awed by the glass and woodwork creations.  There are so many clever and patient people in this world.