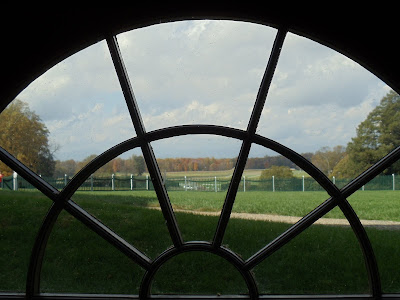 After a day without presidential museums (the drive-by at Woodrow Wilson's doesn't count) we went to James Madison's Montpelier.  This is the view from the basement kitchen window.  Not bad.
Mr. Madison, the oldest of 12 children, was hailed by his peers as the "Father of the Constitution," which he developed after months of study in his library of over 6,000 books.  His list of accomplishments is extensive, but the most  impressive is marrying Dolley Payne Todd, who was 17 years younger and 3 1/2" taller,  (he was the smallest President to date at 5'4" and just 100 pounds) and they were married for 41 years until his death at the age of 85.  Historians seem to agree that she was the first First Lady, politically astute, charming, gracious, and a flamboyant fashion trendsetter.  Remember the story of how she famously saved the portrait of George Washington when the British set fire to the White House in 1814.  What a woman! 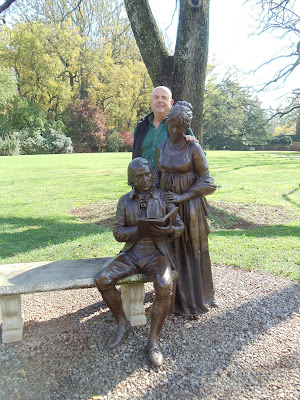 A life-sized statue of James and Dolley.
www.montpelier.org is a great website if you are interested in more info. 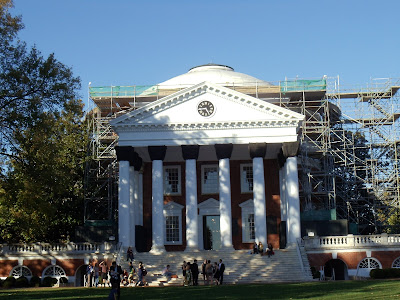 The Rotunda at the University of Virgina, which was designed by Thomas Jefferson.  Not just the Rotunda, but the entire beautiful campus, with lots of gardens and quiet study retreats.  With a telescope he could watch the construction from Monticello.  Isn't it nice that it is being maintained?

Today's favorite sighting is "St. Isidore the Farmer Catholic Church" in Orange, VA, but we drove by too quickly to get a picture.  Doncha love it?