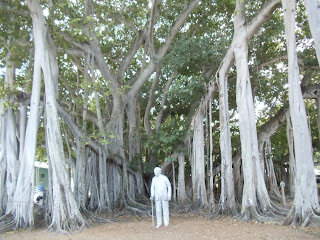 I forgot to tell you about the Thomas Edison and Henry Ford Winter Home museum.  Along with Edison's workshop, which is preserved as he left it, are thousands of interesting plants.  One of his missions was to find a domestic source of latex to make rubber for tire production during the war. He planted banyan trees, which do produce latex, but not enough, and now has the largest banyan on the Continental US, second only to Hawaii, It covers more than an acre!  It's amazing how the root-like things hang down and eventually become another trunk in 3 to 5 years.  This is a statue of Tom in the middle of the giant. 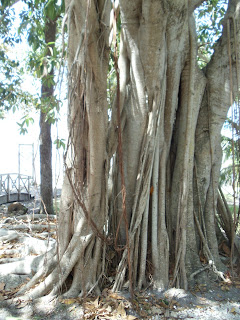 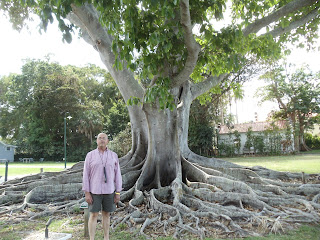 This is some other tree I don't know the name of, but the root system is mostly above the ground.  Doesn't it look like something in a Disney cartoon?  Which charachter is posing in front of it?
Posted by Pat Petri at 3:40 PM