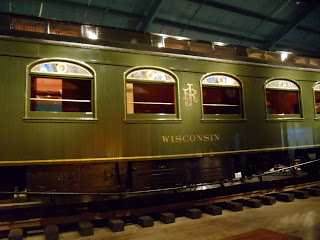 We're finally out of Florida!  We did have some fun there, but it was hot and humid most of the time, so I'm glad to be in Georgia, which will be getting hot any minute now.  Call Al Gore. We visited Key West with Gary and Helen Vanelli and stood on the Southernmost point of the Continental United States.  We got caught in the beginning of Spring Break, but managed to get out before it got really rowdy.

In Sarasota we visited the Ringling Museum, learned all about the circus and the nice life that Wisconsin people (the Ringlings were from Baraboo) made for themselves.  Here is the private car that John and Mabel used on the circus train. It's one of the best museums of all time.  Go!  But you can skip the dog races.  It's a good thing to do once, but that's enough. 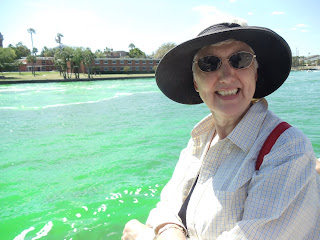 In Tampa we saw the river dyed green for St. Pat's day, but managed to avoid green beer. Their big parade was very Mardi Gras like. A bunch of krewe floats with people flinging beads like crazy.  Apparently the person who catches the most wins.  I'm not sure just what the prize is, but they sure do get excited about it. Not a high school marching band or high-steppin' horse in sight. No tiaraed princesses flirting joyfully with the crowds, no proud flag-waving Veterans in uniform.  Not my idea of a parade, but the Floridians seemed to be all keyed up about it.
Posted by Pat Petri at 3:11 PM